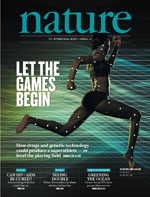 The identification of somatic activating mutations in JAK2 (refs?1–4) and in the thrombopoietin receptor gene (MPL)5 in most patients with myeloproliferative neoplasm (MPN) led to the clinical development of JAK2 kinase inhibitors6, 7. JAK2 inhibitor therapy improves MPN-associated splenomegaly and systemic symptoms but does not significantly decrease or eliminate the MPN clone in most patients with MPN. We therefore sought to characterize mechanisms by which MPN cells persist despite chronic inhibition of JAK2. Here we show that JAK2 inhibitor persistence is associated with reactivation of JAK–STAT signalling and with heterodimerization between activated JAK2 and JAK1 or TYK2, consistent with activation of JAK2 in trans by other JAK kinases. Further, this phenomenon is reversible: JAK2 inhibitor withdrawal is associated with resensitization to JAK2 kinase inhibitors and with reversible changes in JAK2 expression. We saw increased JAK2 heterodimerization and sustained JAK2 activation in cell lines, in murine models and in patients treated with JAK2 inhibitors. RNA interference and pharmacological studies show that JAK2-inhibitor-persistent cells remain dependent on JAK2 protein expression. Consequently, therapies that result in JAK2 degradation retain efficacy in persistent cells and may provide additional benefit to patients with JAK2-dependent malignancies treated with JAK2 inhibitors.